PlayStation Network members have also endured a week without online gaming access after the Japanese giant pulled the plug on the service last Wednesday.

This evening Sony issued a statement saying that users' personal information, including "name, address, country, email address, birthdate, PlayStation Network password and login" had been obtained by an unauthorised person. The statement added: "While there is no evidence at this time that credit card data was taken, we cannot rule out the possibility."

Security experts have warned gamers to keep a close eye on their credit card accounts after what Sony described only as an “external intrusion”. Sony's PlayStation Network has around 70 million members worldwide.

On April 23 it said: “Our efforts to resolve this matter involve re-building our system to further strengthen our network infrastructure.

“Though this task is time-consuming, we decided it was worth the time necessary to provide the system with additional security.”

I don't know why people would expect any more from Sony. The company's history is littered with countless examples of the consumer taking a back seat to their malicious ignorance across several of the industries they deal with. It's why I never understood the PS fanboyism.. it's Sony, do people not read, have these people not owned other Sony products?! From DRM to rootkits through to proprietary formats, piss poor customer service and what they've done with PS.. I just don't understand it -- even my most shuttered acquaintances know it's cool to hate on Sony and they don't even know why. Perhaps now, given this disaster, it's easier to understand? ..a console hack took everything down and stole your stuff, GGs..

Either way, we'll see how it all goes, hopefully there aren't too many victims as a result -- since your personal information (including credit card and security answers) are possibly compromised you've got a long day ahead of you if you used any of that on other sites..
Top

Xbox all the way :D
Top 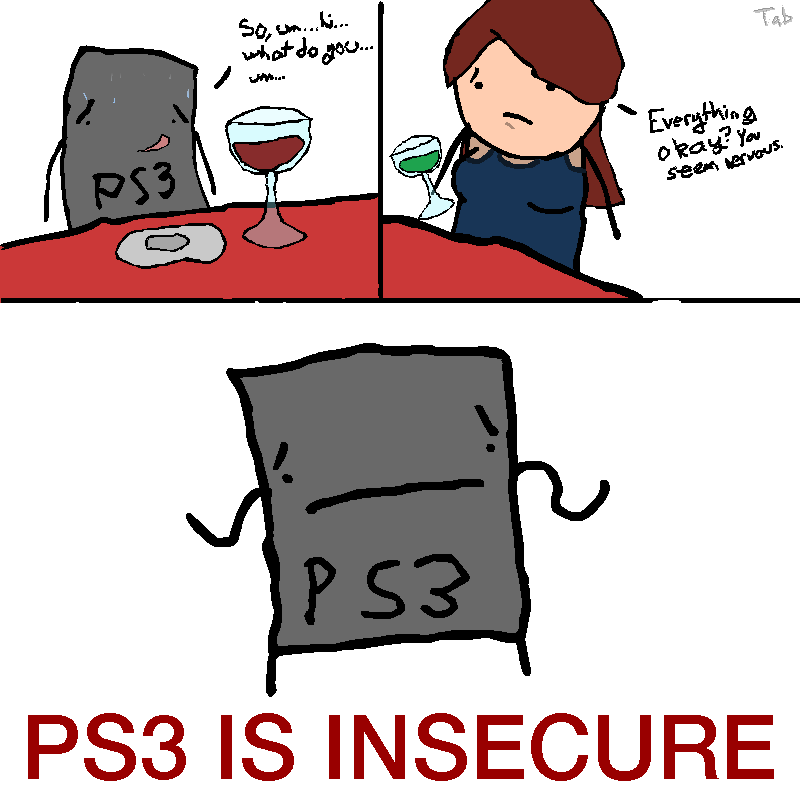 An army of sheep led by a lion, can defeat an army of lions led by a sheep.

How much we ought to dread the jaws of hell, if the jaws of so small an animal as a wolf can make a whole city tremble through fear
Top

kevin butler better have a gut buster stored in his quiver to make up for this one
alexmeswarb.com .::. ideacombine - Granbury TX Web Design
Top

These jokers brought up the network to allow you to reset your password using e-mail address and DOB.. Of course whoever has access to the user data has that information and therefore could now lock you out of your account too. Sony, eventually realizing this, takes the thing down again. LOL?

Of course you should rest assured since Sony's CEO thinks this is all just a hiccup.

Seriously, aside from how awesome the console itself may be -- what will it take for fanboys to realize that the whole thing is actually crap because of the company behind it? At this point this is utterly indefensible. Hey PS3 owner: it's not your fault that you bought in to the mania; though some of the signs were there (rootkits, etc) I doubt people could have predicted this disaster with a repeatable amount of accuracy. Cut your losses, abandon the platform, sell it before prices drop to even lower levels and use that to upgrade your PC and support that community instead!
Top

I've said this a few times on mumble but i'm happy this all happened.

As a PS3 and PSP owner who rarely uses the system, doesn't have anything too personal stored on his account, i get 2 free games for each system. Easy win.

Thanks for the information, we hope you'll sign the attached release form so that you can enjoy your new Ecco the Dolphin and Sonic 3D games!

Infamous and Dead Nation i think, as i have LBP and Wipeout never interested me and Ratchet and Clank is supposed to be a "mini game" in between two other games.
／l、
（ﾟ､ ｡ ７
l、 ~ヽ
じしf_,)ノ
Sometimes Glass Shimmers More Than Diamonds Because It Has More To Prove.
Top

Ahh well, Ive always wanted Infamouse and I gave my LBP away but i wanted it again! so :D