As cc// prepare for their place on the play-off podium and Blue and Purple de-stress after the journey that was the Crack Clan Season 14 experience, I thought I’d take the chance to the current comings and goings of all 3 teams from the past week.

CC Prem have had a hugely successful season, earning themselves a first-round BYE in the play-offs due to their second place position in the group stages. My personal highlight of the season was their Week 6 victory, an event that was advertised as the most exciting TF2 fixture in recent years and will be repeated later this week versusÂ

Broder in the semi-finals. CC started their group stage last season from 4th and worked their way up to the final in a fabulous fashion and it really shows progress that they have the privileged of a jump straight to the semi’s. Best of luck boys! 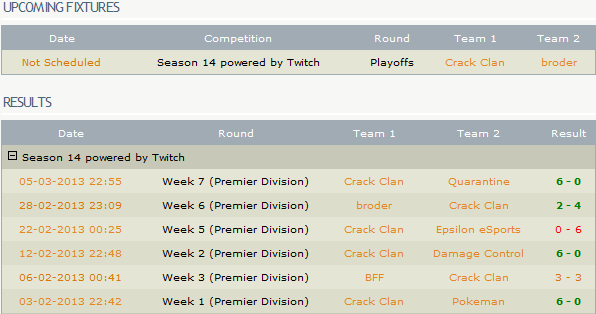 cc//Purple were the only Crack Clan team to place 1st in their division, dropping a single map in 7 weeks of play and buying them a confirmed slot in Division 3 next season. Purple had the following statement:

“The 2 final matches of our season would decide our outcome in it. We figured that if we lost a single map, we would tie with our first opponents â€™Icdeadbearsâ€™. The teams we would have to go through in order to secure the season win, â€™IDK Insanityâ€™ and â€™Svampâ€™, we initially thought would provide a huge challenge.

But on second thought, we might have had to struggle since in both matches we would play Granary, which is probably our weakest map. Luckily for us, but a shame for the TF2 community, â€™IDKâ€™ folded and â€™Svampâ€™ didnâ€™t seem like such a challenge, especially since we were going to play two of our strongest maps.

It turned out as expected, with 5-0 on both maps. Although the scoreline doesnâ€™t show it, there were some times where we had to struggle.

Season summary: The season started a bit rough but getting picked up under Crack Clanâ€™s wings and representing as the Purple Squad really gave us the motivation needed for improving like we did and to win the season. And thatâ€™s why this season is dedicated to everyone in the Crack Clan community, and to everyone who has helped us along the way.

And to the team we faced, and has survived from folding, during the season: GG and good luck in S15”
cc//ePPz

cc//Blue haven’t had as much success this season, sadly earning themselves a relegation spot after conceding a default loss to knock0ut in the final seconds of the season. dox, CEO of Crack Clan, had the following to say:

Unfortunately it doesn’t always work out as planned; with another season having slipped below expectations for this squad the executive decision has been made to hang up the Blue jerseys and disassemble the roster. I’d like to thank all the ‘keeners’ that helped write the story of this journey and brought us some great times in the past that both made Blue a force to be reckoned with and also propped it up as a great example of our “higher ground” initiatives.
cc//dox

Tune into the CC vs Broder game later this week to cheer on the boys and keep your ear to the ground for future news.